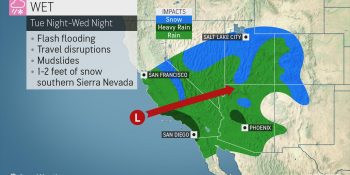 Following a delayed start to the wet season in fire-ravaged California, the switch has been turned on as a series of storms continues to douse the Golden State. Soon after a storm over Northern and Central California winds down, a new plume of moisture, or an atmospheric river, will unleash heavy rain and high country snow over Southern California to the interior Southwest at midweek. The storm is not expected to unleash the equivalent of the late-November blast of rain and snow; however, it is likely to cause travel disruptions inRead More