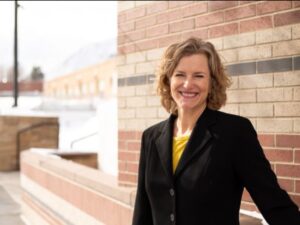 Carrie Besnette Hauser is the 2021-22 Chair of the Colorado Parks and Wildlife Commission. She lives in Glenwood Springs.

Previous columns in this space have highlighted stories about the 2.5 million acres of land managed by Colorado Parks and Wildlife (CPW). These include 43 state parks, 350 state wildlife areas and 240 state trust properties, home to the myriad species of wild animals and aquatic creatures.Often untold are accounts of the humans who protect, study, maintain and advocate for the places and critters so many Coloradans have come to appreciate, enjoy and expect to exist and thrive in perpetuity. This expectation isn’t met by accident nor is it a guarantee. It takes numerous CPW professionals and volunteers working every day to care for such a wide range of outdoor recreation assets, fragile wildlife habitats and animals large and small – all while also focusing on the health and safety of the public.One notable story centers around the many CPW team members who have contributed to the success of Colorado’s state fish – the greenback cutthroat trout. Approaching extinction, the species was confirmed this fall to be naturally reproducing in Herman Gulch, one of the first places the agency stocked the trout in its native South Platte River drainage.This accomplishment stemmed from a highly complex and coordinated effort that took place over a decade. In 2012, CPW confirmed that tiny Bear Creek, on the southwest edge of Colorado Springs in the Arkansas River drainage, was home to an unlikely population of wild greenback cutthroat trout. Outside their native range, the fish are believed to have been brought to Bear Creek from the South Platte Basin in the late 1800s for a tourist fishing enterprise. The discovery activated the CPW’s Greenback Recovery Team to protect the 3 ½-mile stretch of water holding the only known population of naturally reproducing greenbacks. It has not been easy or smooth. Science is complicated and setbacks do occur. There have been flash floods and wildfires. Invasive and aggressive brook trout are a constant threat, moving upstream and out-competing the greenbacks. In one case, 5,000 1-inch greenbacks stocked in the northeast region did not survive.This natural reproduction of the greenbacks in Herman Gulch is the result of many individuals who never gave up. These people love wildlife and caring for Colorado’s natural resources. This multi-agency group includes state and federal aquatic researchers, biologists and hatchery managers such as Kevin Rogers, Harry Crockett, Josh Nehring, Cory Noble, Boyd Wright, Jeff Spohn, Boyd Wright, Matt Nicholl and Bryan Johnson. And this list doesn’t reflect all the wildlife officers who helped spawn and stock greenbacks as well as volunteers and partner agencies deeply involved in this effort.The other side of triumph is tragedy. When the absolute worst happens, selfless and dedicated CPW professionals respond. There have been 41 water-related fatalities this year on Colorado’s waters including seven in Lake Pueblo, Colorado’s busiest state park.Lake Pueblo Park Manager Joe Stadterman and his team responded to too many distress calls in 2022. Risking their own lives, they went out on patrol boats in dangerous winds and storms, and often in the dark, to pull people from pounding waves. They performed CPR on lifeless children and tended to victims with serious injuries.Time after time, these brave officers showed up for others. If not for their efforts and personal sacrifices, the number of fatalities would have been much higher.Notably, Stadterman and members of his team also serve on CPW’s Marine Evidence Recovery Team, which responds to drownings both on CPW-managed waters and across the state.  The team has faced an escalating death toll in recent years as outdoor recreation has exploded.Finally, a group of human heroes who often go without fanfare is the 4,459 volunteers who donated 311,150 hours of their personal time last year – the equivalent of 150 full-time employees. CPW’s four regional volunteer coordinators deserve mention: Lori Morgan, Jeanette Lara, Trina Romero and Cathy Brons. These women are passionate, dedicated and work incredibly hard to support CPW’s mission through volunteer engagement.The CPW Volunteer Program provides recruitment, screening, training, retention, support and resources for state parks, wildlife areas, hatcheries, educational programs and administrative offices across the state. Volunteerism is a cost-effective way to help manage Colorado’s natural resources while cultivating stewardship and building stronger connections between CPW and local communities.As 2022 comes to a close, it is a perfect time to understand, recognize and appreciate the human side of public safety and stewardship – of our treasured state lands and waterways, habitats and wildlife.Carrie Besnette Hauser is the 2021-23 chair of the Colorado Parks & Wildlife Commission. She lives in Glenwood Springs.