The Colorado Parks & Wildlife (CPW) Commission traditionally meets on the eastern end of our state for its November meeting. We do so, in part, to celebrate and highlight the importance of agriculture to Colorado, and the partnerships that farmers, ranchers and other landowners and land managers forge with CPW to provide opportunities for outdoor enthusiasts and to preserve critical habitat for wildlife.

Last week, the CPW Commission will convene in Lamar. In advance of our regular meeting and alongside members of the Agriculture and Great Outdoors Colorado boards as well as local community leaders, we will assemble at the ranch of Dallas and Brenda May for a truly extraordinary wildlife conservation event.

There, in the colorful fall tapestry of the Eastern Plains, we will observe and assist in releasing black-footed ferrets into the wild.

Why is this so special? Because CPW’s work with its federal and state partners illustrates the agency’s dedication to wildlife conservation and the May’s commitment to preserving habitat and wildlife, all done in the context of an historic working ranch.

Black-footed ferrets are North America’s rarest mammal and were thought to be extinct twice. Before CPW’s recent species reintroduction efforts, they had been absent from Colorado since the early 1940s. They are the only ferret species native to North America. That Colorado is now home to seven reintroduction sites is an amazing success.

Planning for the release, CPW Species Conservation Coordinator Tina Jackson said, “recovery of a species like the black-footed ferret depends on long-term habitat management at large scales, and in Colorado, that means partnering with the great private landowners and agricultural organizations across the state. We are excited to bring the black-footed ferret back to the May Ranch and to work with the family in the years to come.”

Earlier this year, Dallas and Brenda May – notably, he serves as a CPW Commissioner and she on the GOCO Board – and their multi-generational family were presented with the Leopold Conservation Award, named for renowned conservationist Aldo Leopold. In his book, A Sand County Almanac, Leopold called for an ethical relationship between people and the land they own and manage. The development of a land ethic was, he wrote, “an evolutionary possibility and ecological necessity.”

Accordingly, the award “recognizes extraordinary achievement in voluntary conservation” and is intended to “inspire others through their example, and help the general public understand the vital role private landowners play in conservation success.”

The Mays were recognized for “improving wildlife habitat, water quality, and grass and soil health” and for their dedication to “leaving their land better than how they found it.”

The award, presented earlier this year at the Colorado Cattleman’s Association convention, described myriad ways the Mays operate their ranch to benefit wildlife and improve ecological biodiversity. Just a few examples include:

The success of CPW’s efforts to reintroduce threatened and endangered species like the black-footed ferret rely on long-standing relationships and cooperation. CPW’s partnership with the Colorado Cattlemen’s Association and its local members has been critical to ferret recovery efforts on private lands. Equally important have been alliances with the USDA’s Natural Resources Conservation Service (NRCS), Pheasants Forever, Bird Conservancy of the Rockies and many others.

Because of support from agricultural producers and private landowners across our great state, Colorado is home to a remarkable variety of wildlife that rely on healthy land, water and air ecosystems to survive and thrive.

Dr. Carrie Besnette Hauser is the 2021-22 Chair of the Colorado Parks & Wildlife Commission. She lives in Glenwood Springs. 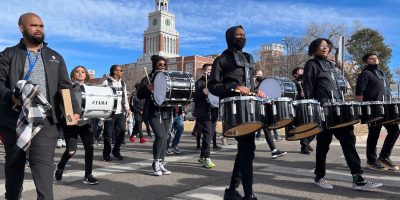