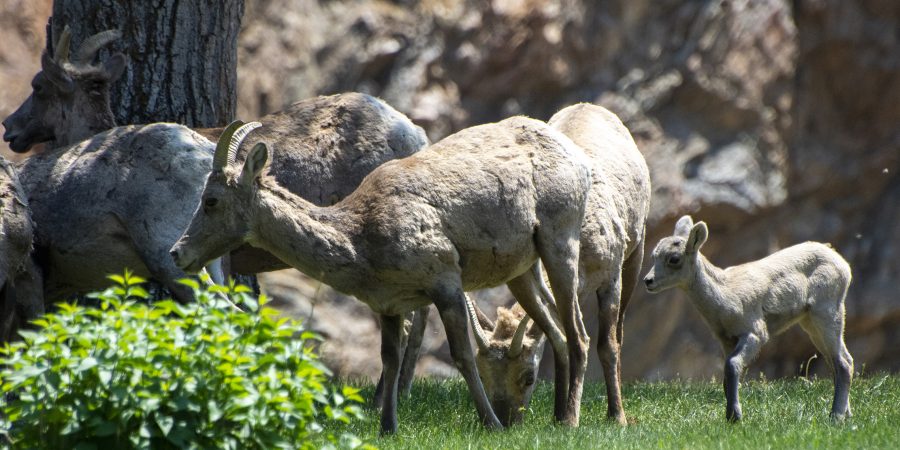 ESTES PARK, Colo. – The use of domestic goats and sheep for hobby livestock or commercialized purposes employed by municipalities and landowners for weed and vegetation control has wildlife officials issuing a warning of potential implications that could impact our wild Rocky Mountain bighorn sheep populations.

These large groups of domestic animals do quick work on weed control, but there is another side of the equation that conveniently gets left out of the overall picture.

Wildlife officials have concerns with these ‘weed-control’ domestic goat batallones descending on Estes Park this week. The reason – potential interaction with three different Rocky Mountain bighorn sheep herds in and around Estes Park – may have detrimental impacts.

The mechanism of disease introduction into wild herds is almost always through comingling. Backyard hobby herds with poor enclosures, escaped domestics and large groups of domestic sheep and goats too close to wild sheep can result in contact and subsequent infection.

“It only takes one sheep that contracts a disease to hinder an entire herd,” said Chase Rylands, wildlife officer out of Estes Park.

“The suite of pathogens which kill bighorns are well understood,’ added CPW Wildlife Biologist Joe Halseth. “They cause severe respiratory illness in wild bighorns resulting in low lamb survival, all age die-offs and may inhibit population growth for long periods of time. Unfortunately, there are countless instances in Colorado where this has occurred and many bighorn herds in the state have some low level of chronic illness that limits population growth.”

The progression of respiratory disease varies depending on the pathogens present. Symptoms include coughing, nasal discharge and respiratory distress. Adult survivors can become chronic carriers and infect lambs every year.

Wildlife viewing is a strong economic driver in the Estes Park area, which lies at the center of three distinct sheep herds. The Big Thompson Canyon has the most visible bighorn sheep herd in northern Colorado, with sheep occupying habitat from the mouth of the canyon well up to the town of Estes Park. These sheep often cause ‘sheep jams’ with visitors clamoring for a photograph when they show up close to the highway. The St. Vrain herd readily occupies good habitat along Highway 7 and Highway 36, and Rocky Mountain National Park has a robust herd often viewable to park visitors.

Bighorn sheep are emblematic of Colorado and Colorado Parks and Wildlife is proud of the decades of work in restoring bighorns and can only hope that future efforts will see more sheep in more wild places in Colorado. Domestic grazers are very important to Colorado’s economy through the meat and wool markets as well as certain ecosystem services they provide.

“There are numerous best management practices to reduce disease risk to wild bighorns, but the most successful is to keep domestics far away from wild sheep,” Halseth said.

The threat of disease introduction when domestics do comingle with our wild herds is so severe that wildlife officials are sometimes forced to euthanize any wild bighorns that come into contact with the domestics, or ones that appear to show signs of illness afterwards. Inaction may result in a cascading effect of disease outbreak, death and poor population performance, which may take decades to overcome.

“Disease transmission is nothing to be taken lightly with Colorado’s wildlife, especially with bighorns,” Ryands said. “Coexisting with wildlife isn’t always easy, but preventing the comingling of domestic animals with wildlife is most often preventable and essential to sustaining populations of all wildlife.”

Colorado is home to an estimated 7,000 bighorn sheep. CPW, as well as other state agencies across the west, cannot take the risk of having an entire wild herd devastated due to a ram coming back to ewes after comingling with domestics.

“Goats for weed management have been advertised as a win-win,” said Area Wildlife Manager Jason Duetsch. “Although that is in many cases true, it’s also true that they result in a lose-lose scenario in areas where wild sheep are near. Our historic and iconic bighorn populations are extremely susceptible to diseases that domestic sheep can carry with ease.

“This is most often on small hobby farms in this part of the state or by landowners who rent herds for weed management, unaware or sometimes unwilling to accept the potential for harm.”

CPW suggests implementing sound fencing practices, such as using an electric outrigger fence (two feet from wire fencing) or double fencing (two wire fences with a minimum spacing of at least 10 feet in between and a height of eight feet). Considerations could also be made for different weed management strategies when effective separation from wild sheep is not practical.