There were a total of 253,354 acres burned in California in 2019 and the wildfires that scorched the most land area were Kincade (77,758 acres), Walker (54,612 acres), Tucker (14,217 acres) and Maria (9,999 acres), according to the California Department of Forestry and Fire Protection. October was the most active wildfire month this year with 119,814 acres burned, followed by 83,908 acres consumed in September, 21,454 acres burned in July and 16,430 acres charred in August. There were also documented wildfires in every month except February, March and December.

“There were much fewer acres burned this year than last,” said AccuWeather Founder and CEO Dr. Joel N. Myers. “But there were more power outages this year than last, which increased costs for businesses and individuals. We predicted power outages – both proactive and reactive – would be more of a factor and they were, resulting in a significant cost per customer during the duration of the blackouts.”

California’s three big power companies – Pacific Gas & Electric (PG&E), Southern California Edison and San Diego Gas & Electric – engaged in Public Safety Power Shut-offs (PSPS) as part of their plans to prevent wildfires sparked by a transmission line. PG&E’s four mass blackouts in October left hundreds of thousands of homes and business without power, with an Oct. 26 blackout cutting power to as many as three million people, according to The New York Times.

The Insurance Journal estimated that insured losses from California wildfires were $25.4 billion through Oct. 29. It notes, however, “Damage estimates can vary because some only contain insured losses, while others take in everything that was destroyed. After disasters, many people will pay for repairs out of their own pocket, which often leads to under counting.”

Myers agrees there’s a likelihood of a substantial under-estimation of the damages. “The insurance costs through October 29 were $25.4 billion and there were additional fires subsequently damaging roughly 17,000 acres,” he said. “So the total of insured losses is now probably closer to $40 billion and insured losses usually represent only about half of the total loss, suggesting our $80 billion estimate is accurate.” 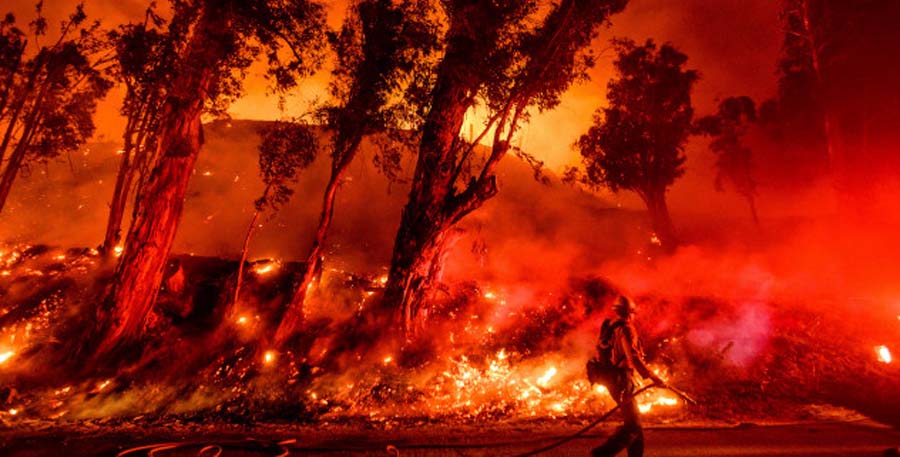 Flames from a backfire consume a hillside as firefighters battle the Maria Fire in Santa Paula, Calif., on Friday, Nov. 1, 2019. According to Ventura County Fire Department, the blaze has scorched more than 8,000 acres and destroyed at least two structures. (AP Photo/Noah Berger)

The 2019 California wildfire season follows two of the largest, most destructive and deadliest seasons in the state’s history. AccuWeather estimates the total damage and economic loss caused by wildfires cost California $400 billion in 2018 and $85 billion in 2017.

The “wet season,” which typically begins in California in October and runs into March, was delayed this year, with many cities receiving no measurable precipitation until late November. In Fresno, rain arrived on Nov. 20, making it the third-latest start to the wet season on record, behind Dec. 11, 1995 and Nov. 30, 1923.

“Typically, we have seen storms come down during the middle or latter part of October and at least bring some precipitation,” said AccuWeather senior meteorologist Dan Kottlowski. “[To go] through the middle of November with no rainfall is highly unusual…. But that was predicted – we thought that would be the case, so we weren’t surprised about that.”

AccuWeather’s estimate includes damage to homes and businesses as well as their contents and cars, job and wage losses, school closures and the costs of power outages to businesses and individuals. It also accounts for economic losses because of highway closures, evacuations and increased insurance premiums throughout the state, firefighting costs, airport closures, flight cancellations and delays and the current and long-term residual health effects on those impacted by smoke and dirty air.

Download the free AccuWeather app to track the temperature for your area. Keep checking back for updates on AccuWeather.com and stay tuned to the AccuWeather Network on DIRECTV, Frontier and Verizon Fios. 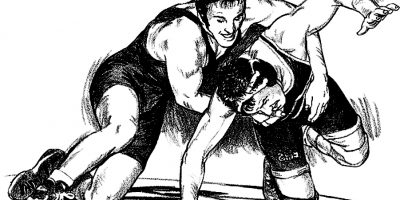 I-70 Corridor to send 15 to state wrestling tournament

The 2020 Ogallala Aquifer Summit will take place in Amarillo, Texas, from March 31 to April 1