Texas man receives conviction for illegal hunting activities in Evergreen and Conifer; fined in excess of $53,000

DENVER – A Colorado Parks and Wildlife investigation into illegal hunting reports over the course of several years led to a plea deal with a Texas man who paid fines in excess of $53,000 thanks to the persistence of wildlife officers.

A Jefferson County judge sentenced Muse to two years of supervised probation and a court-ordered suspension of all hunting, fishing and trapping related activities. Pursuant to his deferred judgement and sentence on his felony conviction, Muse is restricted from possessing a firearm or other weapon, even for hunting purposes, during his two-year probation. Also with his conviction, he is required to undergo a Colorado Parks and Wildlife Commission administrative hearing process to determine the length of time that his hunting and fishing privileges will be suspended. Any suspension of hunting and fishing privileges in Colorado will be honored by all 48 member states through the Wildlife Violator Compact.

As part of the adjudication of the criminal case in this investigation, Muse was ordered to 96 hours of useful public service, pay $500 restitution to Colorado Parks and Wildlife, pay $500 donation to Colorado Operation Game Thief, pay over $53,000 in fines (not including court costs), and complete a hunter education program.

“We investigate crimes like this both to protect the wildlife of the state, but also to protect the interests of legal and ethical hunters here in Colorado,” said CPW Wildlife Officer Scott Murdoch, who worked the case. “That is really important. We have a strong heritage in Colorado of hunting, fishing and trapping, that is what pays for wildlife conservation, but only when it is done right.

“Illegal and unethical actions like what Mr. Muse participated in put a black eye on hunters. Mr. Muse’s actions are those of a poacher, not a hunter, and it is good to bring somebody like Mr. Muse to justice.”

CPW wildlife officers have investigated reports of illegal hunting in the Conifer and Evergreen area for years. Officers often get reports of illegal activity and cannot connect the dots until they get a break in the case, sometimes years later. That was certainly the case in this instance.

This case broke in September 2018 when an Evergreen resident noticed an individual on his property with what appeared to be a dead, headless elk. The witness did an excellent job of being an observer rather than confronting the individual later identified as Muse. The witness called the Jefferson County Sheriff’s Office to report the odd situation. Three deputies arrived on scene to check out the suspicious situation. The deputies attempted to contact Muse, who was dressed in camouflage. Muse immediately disobeyed the deputy’s commands and fled the area. Deputy D. Patterson called Wildlife Officer Scott Murdoch directly and asked for assistance. Communication directly between CPW and the Jefferson County Sheriff’s Office highlights their solid working relationship. Wildlife officers arrived on scene and worked with the Jefferson County deputies to secure the area and search for the suspect at large. Muse was not located.

Later, wildlife officers searched nearby areas where they suspected a poacher may try to kill game and located a bicycle, compound bow, backpack, clothing and the head from the 6X6 bull elk. This was a huge find as it showed officers how Muse was sneaking onto private properties to poach trophy wildlife.

Based on evidence discovered, officers believe Muse would drive around subdivisions in Conifer and Evergreen until he located an animal he wanted to kill. He would then find a place to stash hunting equipment out of sight. To keep people from getting suspicious he wouldn’t park the vehicle close by, instead he would park in a public area and ride his bike to the location where his gear was stashed. Muse would then change into his camo and begin to hunt.  Many of the hunting locations that were identified were right under the noses or in the backyards of Conifer and Evergreen residents.

Officers patiently investigated him and learned about his poaching activities. While searching his cell phone, officers learned that there were other elk and deer that he had killed in Colorado. Officers also knew that Muse had only purchased one elk license in Colorado; the license was not valid in the Evergreen and Conifer area where he hunted.

In December 2018, wildlife officers continued their investigation by executing a search warrant at the Conifer home of his sister. They seized illegally possessed wildlife and other important evidence. Simultaneously, wildlife officers conducted interviews with associates and family members in Nacogdoches County, Texas. Wildlife Officers from Colorado traveled to Texas and met up with Texas Parks and Wildlife Game Wardens, Randy Stovall, Heath Bragg, and Sean Reneau. The Texas Game Wardens were instrumental in obtaining testimony from those with knowledge of Muse’s actions.

“The Texas Game Wardens I worked with were among the most professional and competent I have ever worked with,” said Murdoch.

All said and done, the event that took place in September of 2018 was just the tip of the iceberg as far as Muse’s Colorado poaching goes. Officers learned of a total of five elk and one deer that Muse killed illegally, all without valid licenses. Three of the five elk were considered ‘trophies’ under Colorado law.

The Colorado State legislature created the Samson’s Law, which was approved on April 22, 1998. The law deals with an increase in the penalties for poaching big game animals and is named after an iconic elk ‘Samson’ was poached in Estes Park. The law enforces mandatory penalties for big game animals that meet a ‘trophy’ definition. Muse was certainly seeking out the largest animals to kill.

Wildlife officers presented the case to the Jefferson County District Attorney where it was later filed.

Wildlife officers also charged two other associates involved with the illegal possession of wildlife. Each defendant pleaded guilty to the possession of one bull elk and were fined $1372.50.

“Deputy District Attorney Alex Boguniewicz worked tirelessly to prosecute this case, and I want to commend his efforts,” Murdoch said. “This sends a clear message that wildlife crimes are not going to be tolerated in Jefferson County and that the district attorney’s office is working with CPW to protect wildlife and to protect the interests of legal sportspersons of Colorado.”

You can help stop poaching. If you see a poaching incident, report it. Look at it this way: if you saw someone breaking into your neighbor’s house, would you just stand by and watch? Of course not; you would report it. Poaching is a crime against you, your neighbor and everyone else in the state of Colorado. Call 1-877-COLO-OGT toll-free or Verizon cell phone users can simply dial #OGT.  If you’d prefer, you can e-mail us at .

The grant program was created through House Bill 17-1250. Funding for the grant program comes primarily from the nongame tax check-off program, along with fines from nongame wildlife-based offenses and interest income. 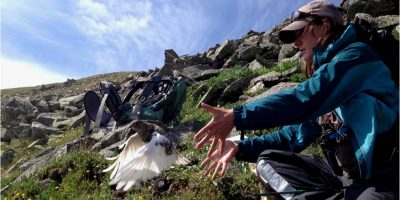 One Comment to Texas man receives conviction for illegal hunting activities in Evergreen and Conifer; fined in excess of $53,000